Here’s what the assignment was supposed to entail:

Sounds straightforward enough. And I suppose for a non-journalist, it would strike fear in their heart to have to walk around and ask questions and make conversation and take notes. For me, it was like a game. I decided that (at least for a while) I was going to see how long I could sit on a bench/roam the halls/walk the trails before someone noticed me and tried to talk to me.

I feel like it’s always better that way. When people choose to talk to you, it’s a lot easier to break the ice. Sometimes I found myself having to go up to people and ask, “Hey, what are you doing?” or “Where can I find ____?” before I could strike up a conversation. It was my goal to be as incognito as possible, to try to blend in, to only take out my notebook at the last second and explain my mission after I had already built up some sort of trust with my subject. For the most part, people are relatively trusting and interested. In one day, I learned about tai-chi, wandered the halls of a brand new high school, got to explore one of my favorite parks in Columbia, met a former MU grad and engineer and had one of the best pork chops and pieces of carrot cake that I’d ever had.

It was fun! And what I learned from this whole orientation assignment was not only to blend in, but to enjoy the unique experience of being a journalist. It taught me the power of observation as a tool to target subjects. Who is sitting alone? Are they doing something interesting? Do they have some sort of stake in the business or building in which they are working? Can they tell me something that I don’t know (the answer is always yes)?

This assignment put me in the journalist’s mindset. Instead of going about my day to day business without really taking the time to analyze my surroundings, I took the time to look, listen and feel out my environment. 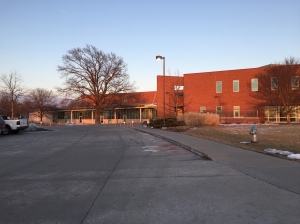 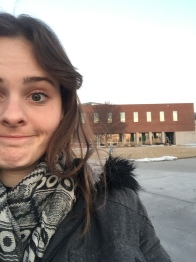 The ARC is also known as the “Activities and Recreation Center” in Columbia. I had actually been there before for a city planning meeting, and so I was familiar with the location. I talked to a man named M. Halferty, who is a self-proclaimed “news junkie” that had just finished a run around the track. He liked the soft flooring of the ARC upstairs. He also graduated from MU with a degree in mechanical engineering. He wouldn’t give me his first name (only the initial) because he’s “wary of the internet.” He had never talked to a reporter before.

This is actually one of my favorite places in Columbia. In the summer, I went for several hikes in the park and have made visits to Devil’s Ice Box. Unfortunately, I went early in the morning, so there weren’t any people in the park.

I was also no stranger to the Boone County Courthouse. I had covered a trial there before, so I honestly didn’t feel much of a need to go in. But it is quite a lovely building. Columbia loves columns. 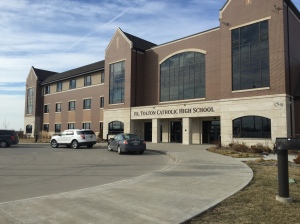 I walked into the school right when it had let out for the day, and I was very lucky to get a tour from one of an English and journalism teacher that had graduated from the J-School. Her name was Kellie Moore. I found out that the school had been open for three years. Moore started the Tolton Times online newspaper (I tried to insert a link, but it didn’t work) with about six girls from the school. She hopes it will grow over time. I also talked to Erika Thronhill, who is also a teacher at the school. She said that despite the newness of the school, the students’ athletic and scholastic teams have seen a lot of success, especially with the mock trial and wrestling teams that won first place awards in the state competitions. 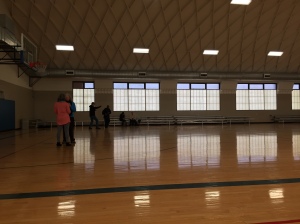 This was my favorite place. As you can see on the left, the armory was hosting Tai Chi classes and people were really excited that someone had taken interest. I talked to the woman at the front desk, Brandee Prince, who told me about how the Armory hosts a youth program where kids come in after school and play basketball and other games until the evenings. On snow days, the program opens at 11 so that students can spend their day off in a positive environment. I also talked to Kenny Greene, who was the instructor for the Tai Chi class. He explained how he got involved with the practice and how it focuses on the balance of yin and yang.

Heuer’s makes a mean pork chop. I loved the environment in Heuer’s because it had such a close feel. Everyone in the restaurant knew each other and even though it was a little bit of a trek, I think I’ll go back. I talked to one of the servers, Brenda, about the fresh eggs that they sell at the store. She said that fresh eggs just taste so much better than regular eggs from the store and they last longer. It made me think of the chicken ordinance story that we published.